X Natural Mineral water has presented 400 cartons of bottled water to the Black Stars team as they prepare for Thursday’s2021 Africa Cup of Nations qualifying match against Sudan. 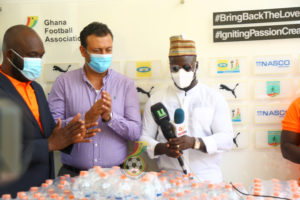 The Black Stars are currently in camp preparing for the double-header and the former Skipper is hoping that this gesture will boost their confidence to win against Sudan.

He also added that the current times demands for the players, management and technical team must be hydrated and healthy at all times. 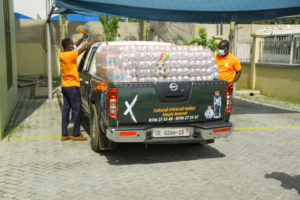 “I have played the game before and I know how important water is when it comes to football and in the human body so we decided to donate 400 packs of X Natural Mineral water to the Black Stars to show our support. We are here to show love to the Black stars towards their match on Thursday”.

“As a former captain, I know how important this kind of gesture is because when I was the captain, people donated to the Black Starsand so being an Ambassador of X Natural Mineral Water, I decided to do same for the team. And I know the players are going to be happy for this gesture coming from one of their own former colleagues”, the former Black Stars midfielder  stated after the Presentation.

The donation was received by the GFA Head of  Marketing Jamil Maraby who expressed appreciation to X Natural Mineral water for their noble gesture. 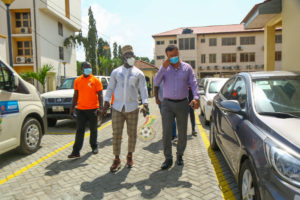 The Black Stars are currently in Cape Coast as they prepare for Thursday’s AFCON qualifier against Sudan.

The game is expected to kick off at 4:00pm  on Thursday behind closed doors after which the senior National team will travel to Sudan for the return encounter on Tuesday November 17.