Gayisu Ibrahim and Akoto Danso were on target on Match Day 16 as Samartex humbled Asokwa Deportivo 2-0 at Okese Park – Ejisu to win yet another game on the road in the 2021/22 Division One League.

Samartex who have a three point lead at the top of the Zone Two table have yet to lose a match since their 1-0 defeat to giants Sekondi Hasaacas on February 11 – to end their 12 game winning run. The Sameraboi based club will host Basake Holy Stars on Sunday in a Match Day 17 tie as the fight for a Premier League ticket continues to unravel.

They hold a three point (37) advantage over second placed New Edubiase United (34) and five points ahead of Mysterious Ebusua Dwarfs (32) who are in third place.

Samartex 1996 have been impressive in the season as their stupendous display ensured that they finished the first round of the season with 10 wins, 1 loss and 4 draws. They cruised to a 2-0 win against Asokwa Deportivo to get their second half off to a bright start.

The League leaders will play as host of new boys Basake Holy Stars at Samartex Park on Sunday – hoping to keep hold of their lead.

Second placed New Edubiase United won handsomely on Match Day 16 as they romped to a 4-0 win against Achiken FC to stay in contention and keep the pressure on leaders Samartex. The former MTN FA Cup champions must dig deep to pick all the points as they travel to Swedru to take on All Blacks this weekend. The Swedru battle – will pit two of the best teams in the Zone against each other with the home side holding out a strong record at home.

They are 17 points off the top and sit in 11th place in the League table – 14 points behind their visitors (New Edubiase United).

Cape Coast Mysterious Dwarfs will travel to Bekwai to take on Pacific Heroes at the Nana Gyamfi Park on Saturday. The former Premier League side began the second round of the season on a high following a 2-0 win against Bekwai Youth Football Academy.

Ebusua Dwarfs are third in the Zone Two table with 32 points while Pacific Heroes sit in 6th place with 24 points. 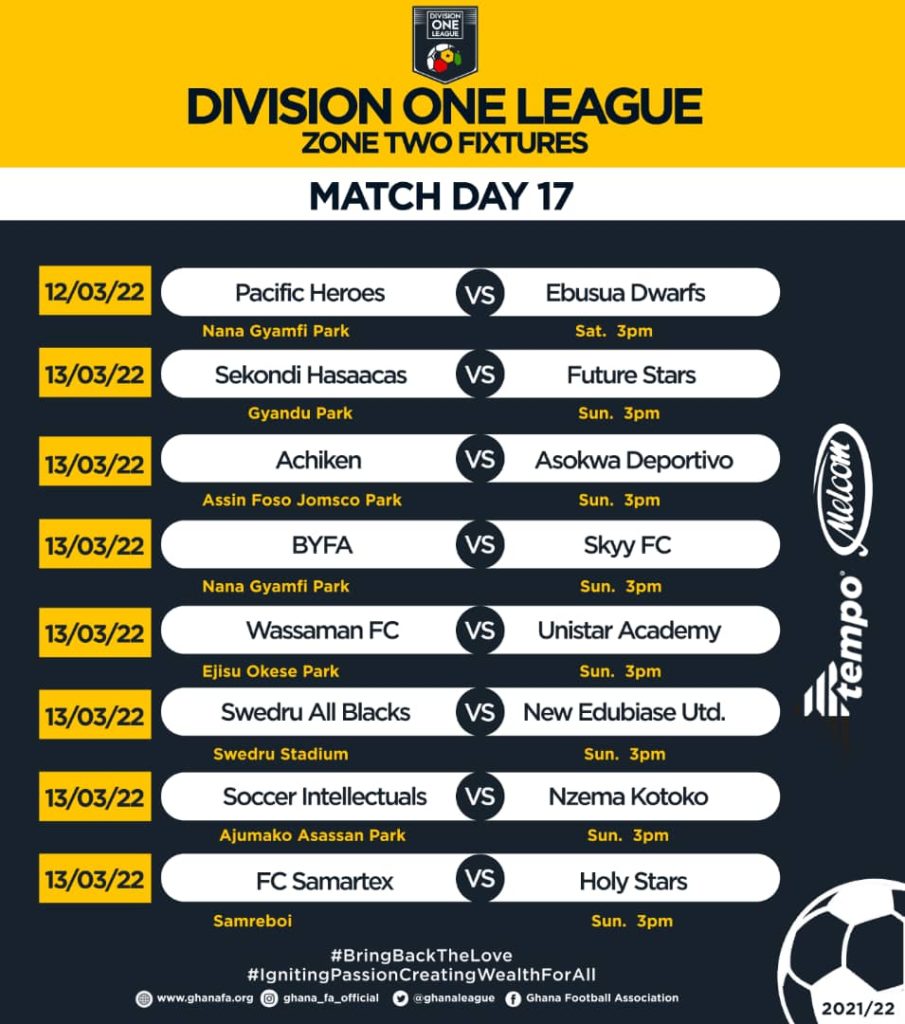