The 2022/23 Malta Guinness Women’s Premier League is here again with some exciting fixtures to ahead to in the Southern Zone. New promoted side Essiam Socrates Soccer Academy and Ridge City FC will have a bite of the cherry on the opening weekend of the season. Former Champions Hasaacas Ladies who lost the title to Ampem Darkoa Ladies are poised to reclaim the top spot this season. Here is what to expect on the opening weekend of matches in the Malta Guinness Women’s Premier League.

Faith Ladies would trek to Swedru park to play as guest of one of the league pioneers Soccer Intellectuals in a game which promises to be cagey and uncompromising. Been their second season in the elite league, Faith Ladies have shown brilliance and dexterity and can be lethal against on a good day. Soccer Intellectuals had a patchy run last season and even battled relegation at some point. The match could go either way but the Faith Ladies will start as favourites following their heroics in the recent Women’s League Super Cup in Tamale.

This match is between two of the strongest sides in the Zone and is expected to live up to the billing as Hasaacas Ladies aim to get their season off to flyer at the Sekondi Gyandu Park. Matches between both sides are unpredictable as the last meeting at the same venue saw the host come from two goals down to draw level. The top highlight of the games remains the two coaches, Yusif Basigi and Mercy Tagoe Quarcoo – two national heroes who have excelled as Coaches in the Premier League.

Two debutants, Ridge City FC and Essiam Socrates Ladies FC will be meeting again but this time in the elite league to mark the beginning of the new challenge. Socrates Ladies had the upper hand in the promotional League play offs but it will be too early to rate them against their opponents as clubs scramble for the points. The game will be live on Max TV.

Thunder Queens will come up against Police Ladies in the first leg of the Accra derby at the PRESEC-Legon Park in the first live game of the season scheduled for 10am on Saturday on Max TV. Even though Thunder Queens were unlucky to finish outside the top four last season, games between both sides have tilted towards them in recent times. Police Ladies are looking to begin the campaign on the right footing after the return of defender Philicity Asuako and goalkeeper, Barikisu Issahaku from the Police Training school.

Cape Coast-based Ladystrikers have been one of the teams with a very good home record in the League and have the chance to cont8nue that envious accolade when they take on Army Ladies at the Robert Mensah Stadium in Cape Coast. After making quite a number of changes to their squad, Army Ladies are a lot more settled coming into this season than they were the previous season – which would help them make a better fist of it. They get a seemingly soft kill in this game as Ladystrikers have lost most of their top performers going into the 2022/23 campaign.

Here are the full fixtures for Match Day One: 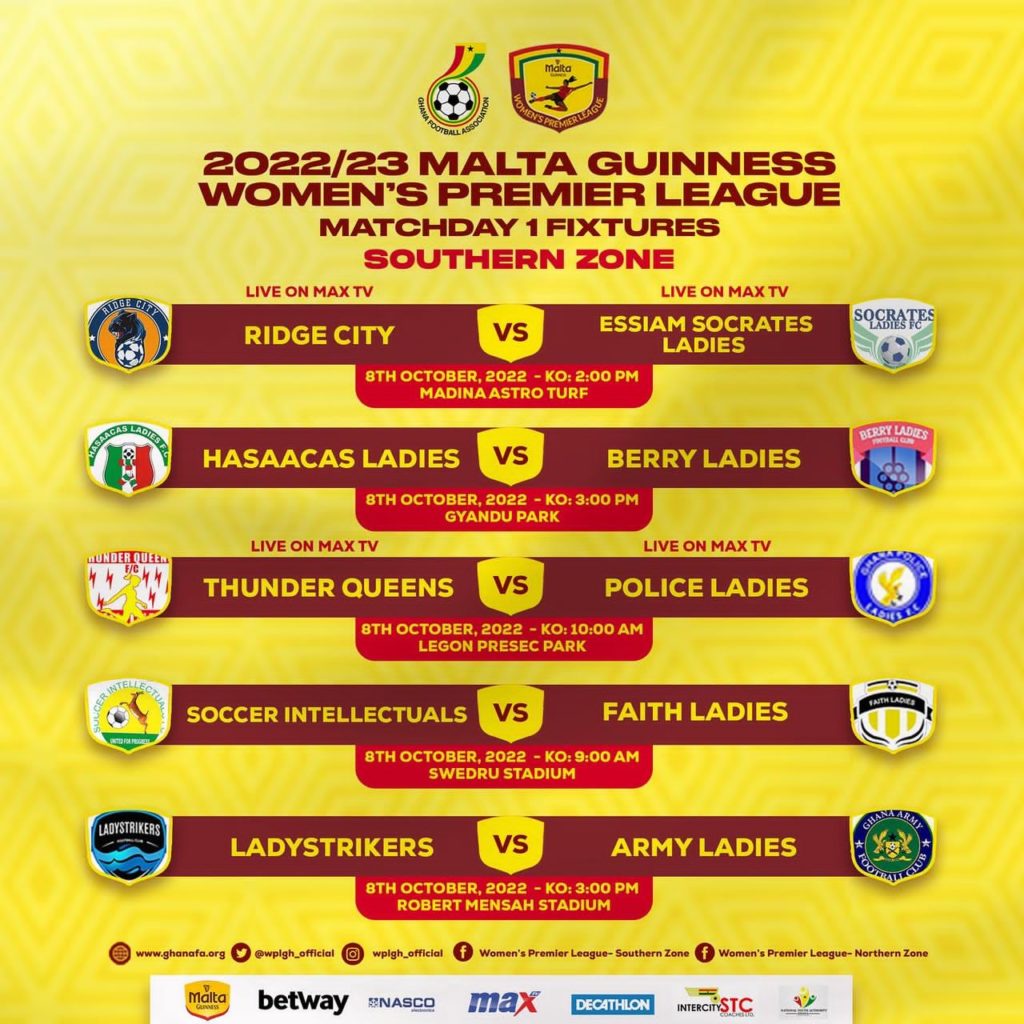