Berekum Chelsea have picked only one point from a possible 9 in their first three matches of the season.

The former Champions began the new season with a 1-0 defeat at newly promoted Bibiani Gold Stars at DUN’S Park, drew their second match 0-0 against Eleven Wonders at home before losing 2-1 to Karela United on Match Day three at the CAM Park.

They have a daunting task against King Faisal – one of the two sides with a 100% winning record in the League thus far. King Faisal Babies may have struggled to retain their Premier League status last season but their exploits in this season’s campaign has been nothing but exceptional.

They started the season with a 1-0 win against WAFA at home before dispatching Aduana FC and AshantiGold SC. They shocked Aduana FC 3-1 at Dormaa on Match Day two and maintained their winning start with a 2-0 win over AshantiGold SC at the Baba Yara stadium with Osman Ibrahim and Enoch Morrison getting on target.

The two teams will lock horns at the Golden City Park in Berekum with the fixture scheduled for live telecast on StarTimes Adepa Channel 247 on Friday, November 19, 2021.

Champions Accra Hearts of Oak will travel to Obuasi to face AshantiGold on Sunday. The Miners have one point ahead of their opponents and sit one place above the Phobians.

AshantiGold have 4 points (Won against Eleven Wonders and drew with Karela United) while Hearts of Oak have collected a paltry 3 points from a possible 9 after three round of games. Hearts of Oak drew goalless with Legon Cities, 1-1 against WAFA and Aduana FC)

The other fixtures for Match Day four are as follows: 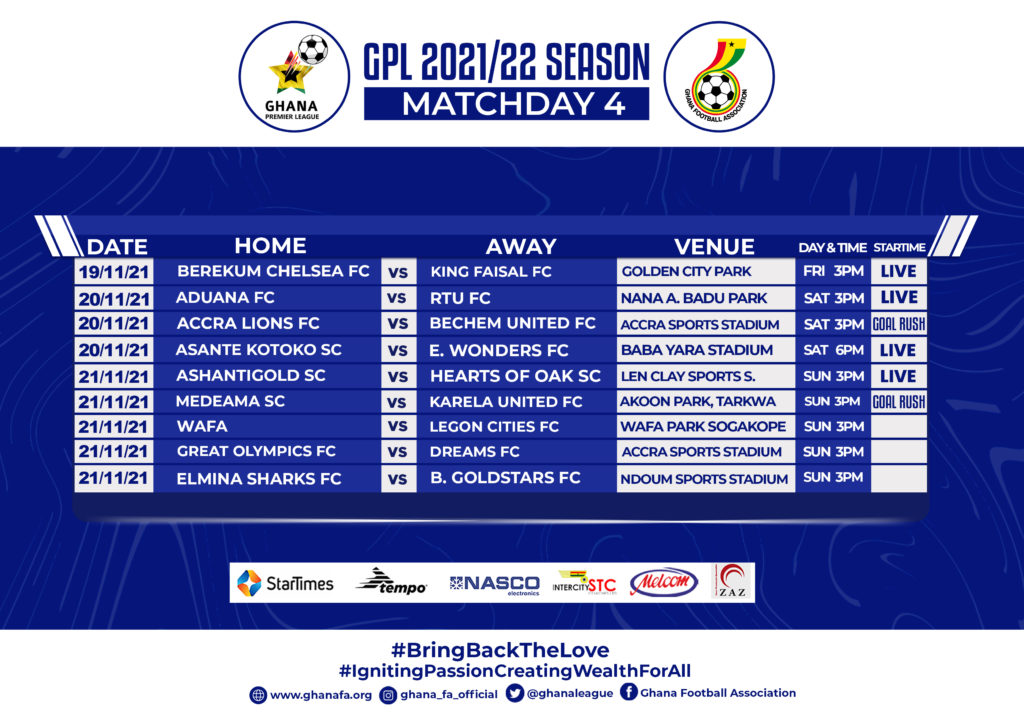