Dreams FC down Hearts of Oak at Dawu

Dreams FC scored two second half goals to beat Hearts of Oak 2-0 on match day 22 of the Ghana Premier League at the theatre of Dreams, Dawu on Sunday.

Hearts of Oak defender Nuru Sulley was sent off in the 55th minute of the game and got punished for it.

Ibrahim Issah should have scored as early as the fifth minute as he benefited from a miscommunication in the defence of the Phobians but the winger fluffed the chance.

Solomon Agbasi and Benjamin Mensah pulled some decent saves in the game to keep the game at 0-0 with Fatawu Mohammed, Ali Huzaif and Agyenim Mensah with all coming close.

Ten minutes into the second half, Hearts were reduced to ten men when defender Nuru Sulley got sent off for a second yellow card - Dreams FC took the lead then Huzaif bundled home a rebound after Mensah had spilled his powerful header.

William Dankyi found Captain Fatawu Mohammed in the box following a decent cross from the left side but Fatawu shot wide from inside the box.

Dreams could have scored the second goal in late on but Sylvester Simba had his shot at goal deflected by Fatawu Mohammed for a throw-in.

In injury time, substitute Sylvester Simba picked up a loose ball from the right corner - raced with it and delivered a low drive which beat goalkeeper Benjamin Mensah at the near post for the second goal of the game.

The Dawu side held on to win the tie 2-0 at the theatre of Dreams – their second win in the second round of the League.

The results takes Dreams FC to 5th in the League table, level on points (34) with Hearts of Oak after 22 League matches. 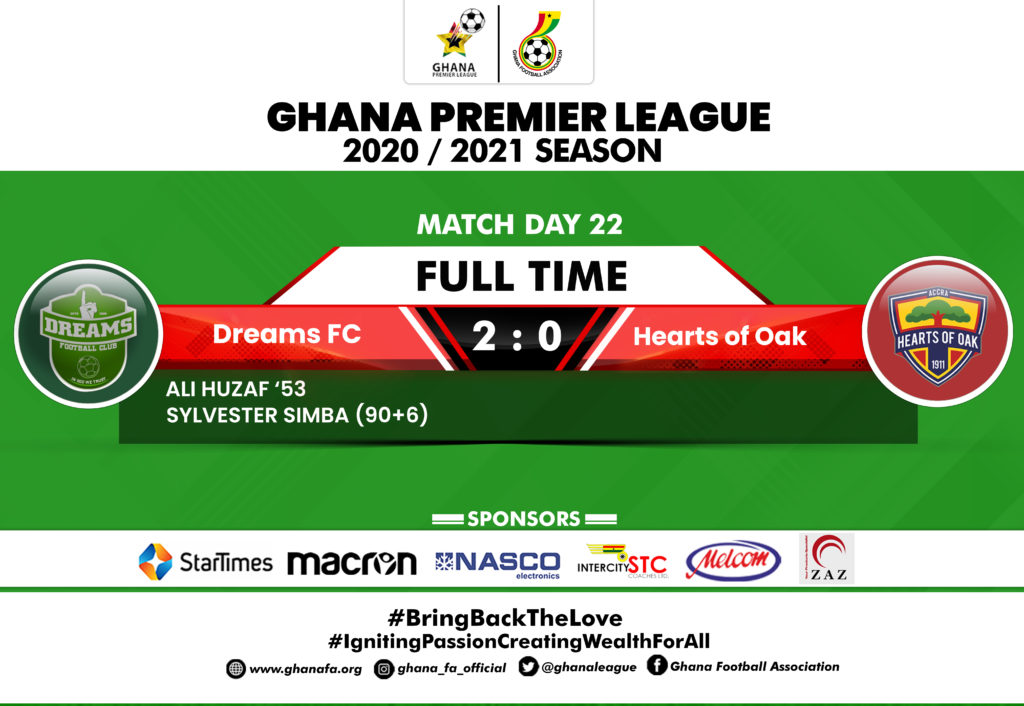