The FA Cup Committee has decided to group all qualified teams in the 2019/20 MTN Round of 32 into Three zones.

The live draw which will  be held on Wednesday March 4 will see all qualified Clubs grouped in three zones according to the National football zoning (Zone One, Zone Two & Zone Three).

Clubs in the Northern, Upper regions and the Brong Ahafo Region will form Zone One.

Qualified clubs in the Ashanti, Western and Central Region will fall in Zone Two while Star Madrid joins clubs from Greater Accra, Eastern and Volta Region in Zone Three.

This decision was taken considering proximity and the distances clubs will have to make to honour their games.

The Round of 32 live draw will be held on Wednesday March 4 at the M Plaza Hotel at 11am.

Representatives of the qualified teams and top GFA officials are expected to attend the draw.

Here is the list of qualified clubs and the zones they will fall under for the draw: 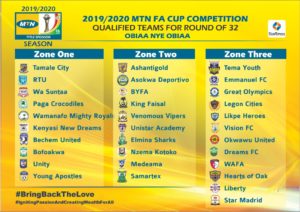