Black Stars Head Coach CK Akunnor  has paid a visit to Leicester FC where he met Ghana defender Daniel Amartey and the Manager of the English Premier League side.

The Senior National team coach had discussions with Amartey on his recovery from an ankle injury he sustained last year.

Coach Akunnor also discussed the player’s injury situation with the Clubs manager Brendan Rodgers and when he is expected to return to action.

Meanwhile, the Ghana head trainer also took the opportunity to discuss tactics and style of play with the manager of Leicester City.

Since he was appointed as head coach of the senior national team, CK Akunnor has been on a scouting tour in Europe where he has met with England-based Andre Ayew and Jordan Ayew, Jeffrey Schlupp, Christian Atsu and Tariq Owusu.

He was also in Belgium where he met some Ghanaian players as well as technical team members of some key Clubs in the country.

Earlier, he was in Germany where he met Kassim Nuhu and Christopher Antwi Adjei as well as other Ghanaian players in the country.

Coach Akunnor is expected to arrive in Ghana soon and  will later announce his squad for next month’s AFCON qualifying matches against Sudan next month. 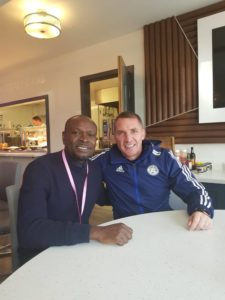