Ghana arrive in San Jose ahead of World Cup

The Black Princesses of Ghana have arrived in the host city of the FIFA U-20 Women’s World Cup to continue their final preparations for the tournament.

The team departed France in the early hours of Monday, August 1, and arrived at the Aeropuerto Internacional Juan Santamaria in San Jose Tuesday morning.

Ghana will play a low profile friendly in Costa Rica before the tournament kicks off on Wednesday, August 10, 2022. 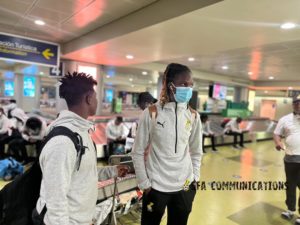 The Black Princesses who are making a record sixth straight FIFA U-20 Women's World Cup appearance are paired in Group D alongside the Netherlands, United States of America and Japan.

Ghana will open her campaign against the United States of America on Thursday, August 11 before taking on Japan on Sunday, August 14 and the Netherlands on Wednesday, August 17, 2022.