This weekend promises to be exciting for consumers of domestic football as two of our national teams, Black Starlets and Black Stars go into action in Cape Coast and Osaka respectively.

The Black Starlets’ dream of making it to the 2023 Total Energies U-17 Africa Cup of Nations in Algeria gets underway on Saturday, June 11 when they take on Nigeria in the opening game of the WAFU B U-17 tournament at the Cape Coast stadium.

Coach Samuel Fabin is aiming to set a new height for the Starlets after missing out in the last two editions of the U-17 Africa Cup of Nations.

Fresh from their first two matches in the TotalEnergies Africa Cup of Nations Cote D’Ivoire 2023 qualifiers against Madagascar and Central African Republic, the Black Stars will take part in the 2022 Kirin tournament in Japan. Ghana will play host Japan on Friday, June 10, 2022 at the Yokohama stadium.

There are also matches in Division One to look ahead to – with only one match to end the season some of the teams are pushing for Premier League football next season. The battle between Tamale City and Nsoatreman FC rumble on in Zone One while Kotoku Royals, Liberty Professionals and Tema Youth fight for the single Premier League slot in Zone Three. 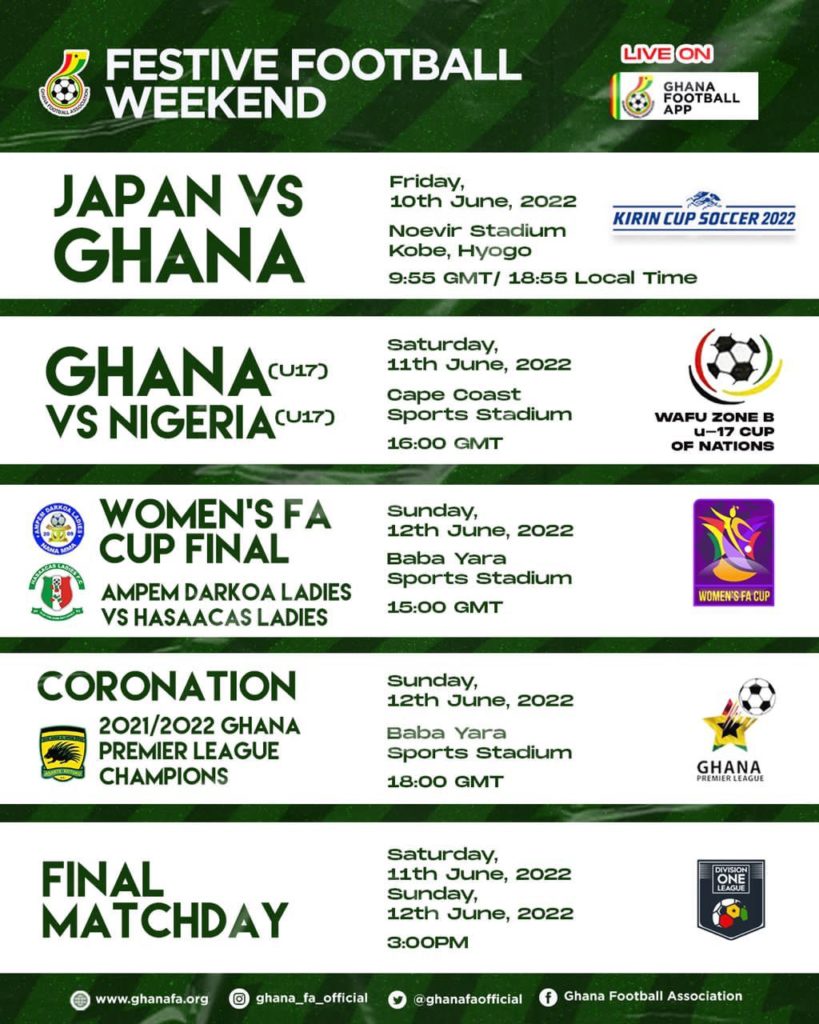 Finally, the moment of glory is upon us as Asante Kotoko will be crowned Ghana Premier League Champions for 2021/22 League season on Sunday when they host Elmina Sharks at the Baba Yara stadium in Kumasi.

All these matches will be live on the Ghana Football App.