The Ghana Football Association has acknowledged a statement by the Ghana Police Service stating its commitment to investigate the alleged shooting incident at the Baba Yara Stadium on Sunday.

Responding to the statement by the Ghana Police Service issued on Monday, General Secretary of the GFA Prosper Harisson Addo said the GFA welcomes the Police statement and will cooperate with them for an investigation to be conducted. 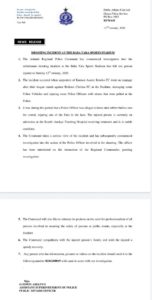 "We welcome the statement by the Ghana Police and we have taken note of the steps they have taken so far, including their commitment to investigate what happened," Addo told www.ghanafa.org.

"As we review reports of our officials and conduct our own inquest, we will also cooperate with the Police and assist them in their investigations.".

"As the Police statement requested, we want to also urge the general public; especially football participants who were at the stadium to submit any evidence in their possession to assist the Police in their investigations to get to the bottom of this unfortunate incident."

The GFA issued a statement on Sunday to condemn the alleged shooting at the Baba Yara Stadium in Kumasi after the Ghana Premier League match with Asante Kotoko and Berekum Chelsea. The GFA has assured the general public that it would deal ruthlessly with any official or club found to have breached the GFA Regulations and Disciplinary Code.

On the football disciplinary side of the issue, the GFA has received the match officials' reports and as per the GFA Regulations and Codes, the GFA has immediately triggered the Disciplinary process.