Black Stars donating their money to help the disaster victims

Players of the Black Stars have donated 50,000 Cedis about ($20,000) to the Accra flood and inferno victims who perished in the twin disaster last week.

The players and management committee members of the team who visited the center of the explosion at Circle, a suburb of Accra on Thursday, donated the money to support the families of those who perished in the disaster, the capital’s worse ever.

The gesture, aimed at paying their respect to the perished souls saw the players led by coach Avram Grant laying a wreath in memory of the over 150 lost lives in the inferno and floods. 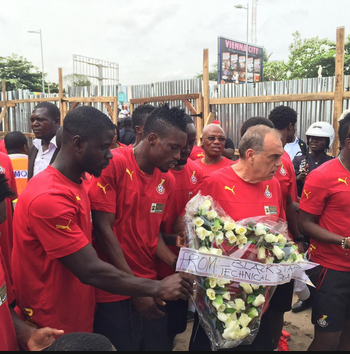 Black Stars also laid wreaths for victims of the fire

The tour comes ahead of the team’s Gabon 2017 Nations Cup qualifier billed against Mauritius at the Accra Sports Stadium on Sunday.

Over 150 lives were lost in the June 3, disaster after people believed to be sheltering from a downpour that caused flooding in the city under a filling station got caught in an exploded.