Soccer Intellectuals keeps punching above their weight and is therefore not surprising to see the them grab the headlines on match week 3. The recorded an astonishing away win against Police Ladies in Accra to register their first away win of the season. Mousseiretou Adina-Akpo’s 11th minute goal ensured the team pick all points over the ‘service Ladies. The win has opened up the zonal title race for Hasaacas Ladies who are two points adrift first placed Berry ladies. Yusif Basigi’s side are gradually taking shape and showing glimpses of what they are noted for. An intriguing fixture is bound to unfold as meeting between both sides mostly end in favor of the ‘Hasmal ladies’. The current performance of Soccer Intellectuals could mean a different scenario as they have impressed in the ongoing season. A hat-trick from Milot Abena Pokua and a goal each from Evelyn Badu and Doris Boaduwaa saw Hasaacas Ladies dispatch Soccer Intellectuals in their last meeting.

This season, neither side has been overly potent in front of goal and this fixture presents a real opportunity for Hasaacas Ladies to test themselves against another side pushing for a top 4 finish.

Lady Strikers will be hoping to pile more misery on Sea Lions as they journey to the Nduom Sports Stadium on match week 4.  The ‘Strikers’ won their last game against Immigration Ladies by a goal to nil. Sea Lions FC are a side that is low in confidence after losing their opening 3 games – including a pain-staking loss to Berry Ladies. The team lies bottom of the zonal league table without a point. They lack the technical mojo to turn things around.

Last season, a brace from Elizabeth Owusua and a goal from Theresa Cobbinah ensured the ‘Butweku mma’ emerged winners in the derby and his weekend presents another opportunity for Lady Strikers to redeem themselves as Sea Lions to continue their dominance in this derby.

Berry ladies are the only unbeaten side in the ongoing League and will aim to preserve their winning run this weekend when they take on Police ladies Police Ladies. The Service ladies began the season on a shaky note following a 1-1 draw against Thunder Queens. They followed up with a 1-0 win over Sea Lions in Elmina thanks to a goal from Grace Anima and lost at home last weekend to Soccer Intellectuals. Their last outing was a game where they barely created chances, or made attempts at goal and missing a penalty in the process.

High-flying Berry Ladies are the only undefeated side in the League, so form-wise, the team is intact with a remarkable attack, scoring an impressive eight goals already and conceding four. Coach Mercy Tagoe Quarcoo Nina Norshie will be in charge of midfield duties while top scorer Felicity Asante take up goal scoring duties. Goals from Juanita Aguadze and Sophia Agyarkwa separated the two sides in a similar fashion last season in a 1-1 stalemate at the McDan La Town Park.

A game of two equals is upon us but the performance of Berry ladies thus far makes them the strong favourites for the points.

Thunder Queens return home this weekend to face Immigration ladies after suffering a narrow loss to Hasaacas Ladies on match day 3 in fiercely contested game. Goalkeeper Rose Teye Baah was in her element as she saved a penalty but could not salvage a point for her side.

Immigration Ladies haver lacked consistency thus far losing two and drawing one. They began the competition with a defeat to Berry Ladies, drew at home with Hasaacas and lost to Lady Strikers. Inexperience is to blame for their unimpressive showing in the league as the blend of young and old players have yet to yield dividend.

Budding star, Elizabeth Oppong and Salma Jai Jabril are expected to be in full flight for the ‘Queens’ while Immigration is also expected to present a solid defence led by Aseye Antwi and Winifred Donkor. 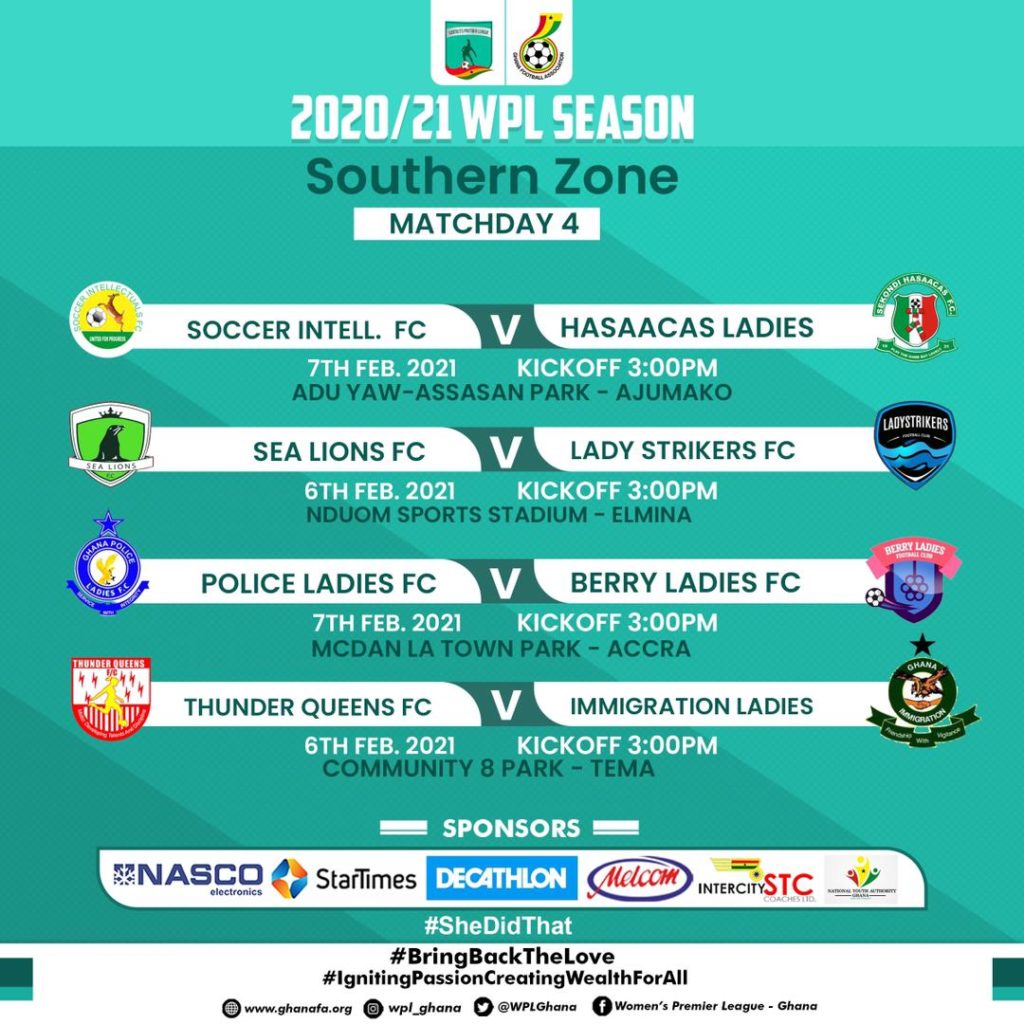