The biggest clash in this weekend’s matches in Zone One will be contested at the Aliu Mahama stadium in Tamale where Tamale City FC takes on Steadfast FC on Saturday.

The two sides go into the match separated by 8 points and lies eight places apart. Tamale City are currently in the 2nd spot with 23 points while Steadfast FC lie in 8th place with 15 points after 11 League matches in Zone One.

Tamale City boats of the Zones’ leading scorer and one of the best players Mohammed Yahaya – an asset that has lighted the entire Zone One since the commencement of the season. Yahaya has scored 8 goals and made 4 assists in Zone One – with his pace, strength and aerial ability, the youngster is undoubtedly one of the most exciting players in the League.

He is expected to lead the lines against their city rivals on Saturday.

Tamale City have won seven, lost two and drawn two in the League and occupies the 2nd spot with 23 points.

Third placed Wa Yaasin will fight for points against Tano Bofoakwa who are in 5th place.

The Sunyani giants experienced an excruciating end to what was a stellar campaign last year as their battle for Premier League status crashed on the final day of the season – giving Real Tamale United an advantage to sail through. Bofoakwa Tano lies 5th in the Zone One table with 16 points – 9 points adrift of leaders Nsoatreman who are at the top with 25 points after 11 matches.

The Twumasi Sports complex will host the match between sixth placed Wamanafo Mighty Royals and leaders Nsoatreman FC – a clash between the top team against a mid-table club – with 9 points separating them.

Fourth placed Young Apostles have a stern test against Unity FC at the Golden City Park at Berekum. The latter have amassed 14 points and sit in 8th place following a surge in their recent performances. 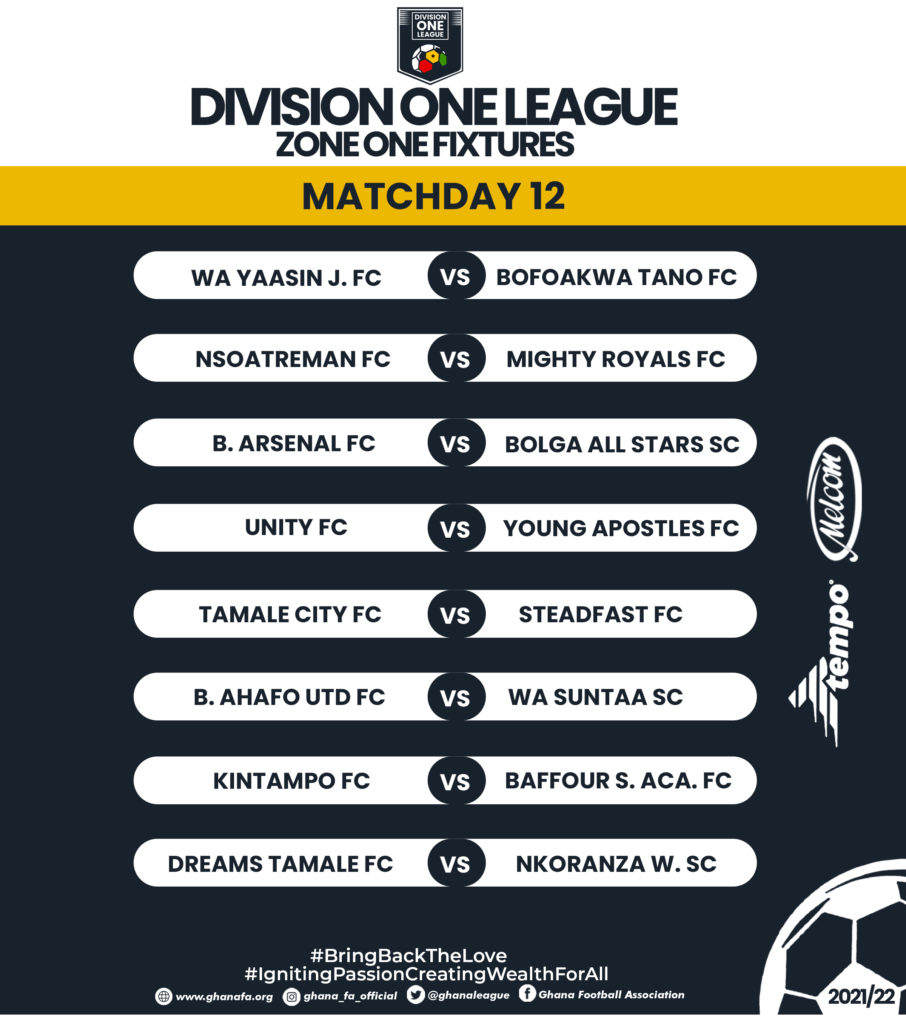