Liberty Professionals shook off last season’s promotion fiasco as they came from behind to beat Golden Kicks 2-1 at the Tema Park on Saturday.

The scientific soccer lads twice failed to qualify for the Premier League as they threw away their lead in Zone three to lose the Premier League slot to Akyem Oda Kotoku Royals on the final day of the 2021/22 season. They were given a second bite of the cherry when a decision was taken to replace AshantiGold in the 2022/23 campaign following the demotion of the latter from the top flight over match manipulation.

Liberty Professionals again blew away that chance despite winning their first match against Cape Coast Mysterious Ebusua Dwarfs. The Dansoman based side cannot afford to slip this time – and in their quest for Premier League football next season they delivered a near perfect performance on Saturday against old foe Golden Kicks FC.

Seedorf Asante rescued them after scoring the match winner after the home side had taken the lead in the 20th following a well worked team effort that found Emmanuel Tetteh who pummeled home from the edge of the box.

Paul Kwame equalized for Liberty Professionals two minutes after the break before Asante smashed home from close range in the 87th minute to give them their first win in the Access Bank Division One League campaign.

Still in Tema – giants Tema Youth were stunned 1-0 by newly promoted side Na God FC on Sunday. The Tema lads who are led by Black Galaxies winger Evans Osei Wusu failed to take advantage of the numerous chances that came their way as Na God FC pounced on a defensive error to punish them.

After a barren first half, Brefo Owusu scored the match winner in the 72nd to give Na God FC all the spoils as they got off to an exciting start to life in the second tier.

Festus Darko scored a decisive goal in the 74th minute as Vision FC dispatched Tudu Mighty Jets 2-1 in their opening match on Saturday.

It took 55 minutes for the home side to break the deadlock after playing a balanced game in the first half. Baki Alifoe netted the opener in the 55th minute but their jubilation was cut short as Usmanu Ganiyu fetched the equalizer for Mighty Jets three minutes later.

With the game heading to a draw Festus Darko delivered a calm finish to send the home fans into a frenzy mood - Vision FC held on to win 2-1 despite a late storm from Tudu Mighty Jets.

Here are Results for Match Day One in Zone Three: 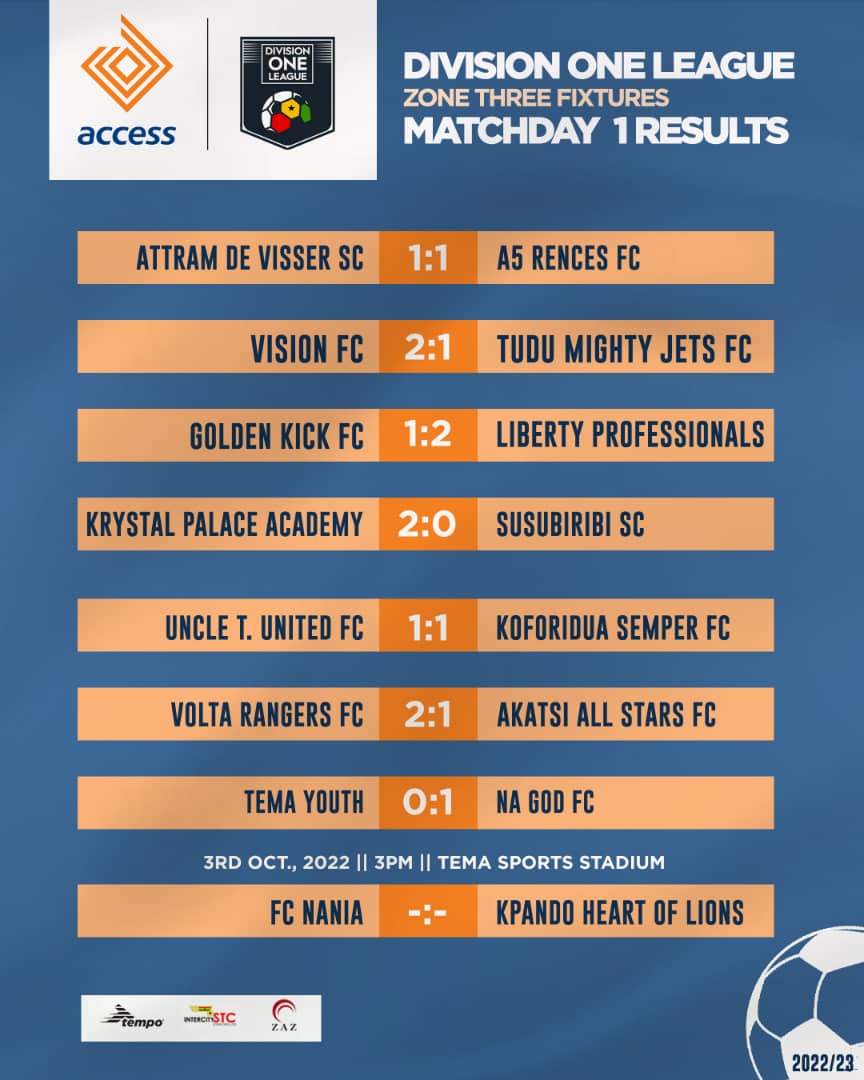