Premier League Hasaacas Ladies failed to pick up maximum points on Matchday 7 of the Malta Guinness Women’s Premier League at the Mankessim Astro Turf as Faith Ladies drew 1:1 with Thunder Queens at home whilst Police Ladies pick up second win on the road against Berry Ladies.

Faith Ladies drew 1:1 at home against Thunder Queens at the McDan La Town Park. Both teams have had a good start to the season and put up a good performance. It was an end-to-end action as both teams created chances and were cautious in defence. Isabella Afia Serwaa found the back of the net in the 22nd minute to put the visitors in the lead. Faith Ladies were awarded a penalty in the 66th minute before Jennifer Kankam Yeboah converted to draw the host level.

Here is a wrap of action on Matchday 7:

Ridge City are still without a win in the competition following five defeats and two draws in the ongoing competition. The newly promoted side lost 4:3 to Ladystrikers on Sunday. The seven-goal thriller was full of drama as the host scored two quick fire goals within one minute through Hannah (16th) and Esther Owusu (17th) minute.

Ridge City responded by scoring two goals in two minutes through Deborah Annoh and Loretta Afful. The host then mounted pressure on the debutants and scored two goals through Edem Atovor to extend their lead in the 21st minute before the visitors drew level in the Jennifer Numuah.

Ridge City improved their play by having a lion of possession in the second half their effort yielded no result as Edem Atovor extended the lead for the visitors in the 65th minute. The tempo of the game dropped after the fourth goal as the two sides threated cautiously in order not to concede again.

But it was Ridge City that took the fight to the home side in search of the equalizer. Lady Strikers defended gallantly to keep hold of their lead until the 90th minute when the referee blew her whistle to bring proceedings to an end.

Elsewhere - Police Ladies picked up a crucial away win - their second of the season when they beat Berry Ladies 1-0 at the Madina Astro Turf. Berry Ladies went into this fixture looking for a win to restore their pride having suffered defeat at the Mankessim Astro Turf to newbies, Essiam Socrates on Matchday Six. But Jane Ayieyam made matters worse for the Madina side failed to take advantage as the game ended 1:0 – their third loss of the season and second in a row.

Here is the full results in the Southern Zone: 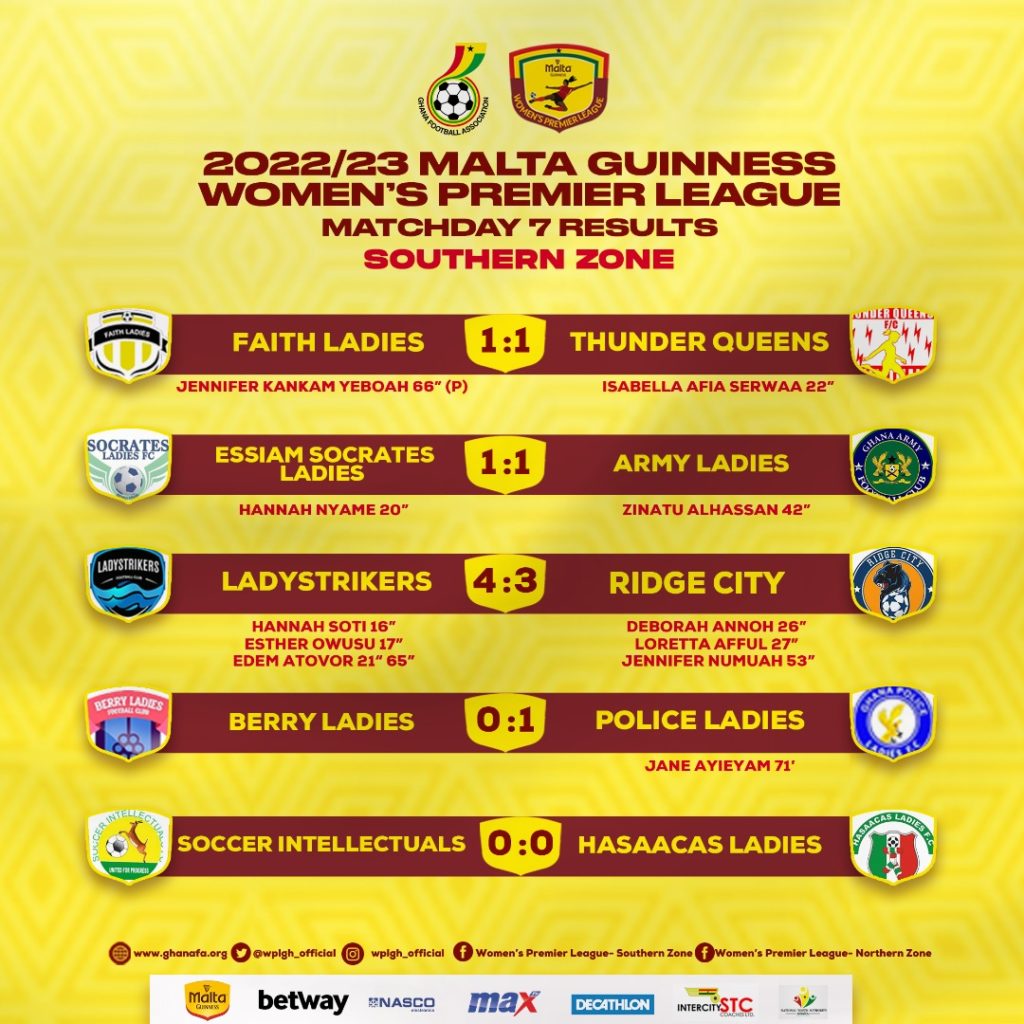