A select side of Ex- footballers from the Greater Accra Region defeated their colleagues from the Central and Western Region 4-3 in the Battle of the Stars match played at the Nduom Sports Complex in Elmina.

The Professional Footballers Association of Ghana(PFAG) members engaged each other in an exhibition clash as part of an initiative of the Ghana Tourism Authority (GTA), the GFA and the Professional Footballers Association of Ghana (PFAG), with support from GTV Sports+, to promote domestic and international tourism through football. 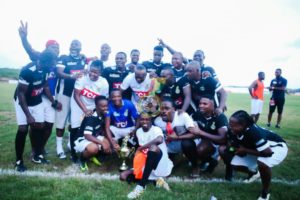 Ex- Ghana international Felix Aboagye shot  the Central& Western PFAG team in the lead with a quick brace before the Accra-team pulled one back.

Augustine Arhinful then scored for the Central& Western side but after some substitutions in the second half, the Accra-based side fought back to secure a hard earned win.

Godfred Aduobi who scored a hat-trick for the Accra-based side, was adjudged the best player of the match.